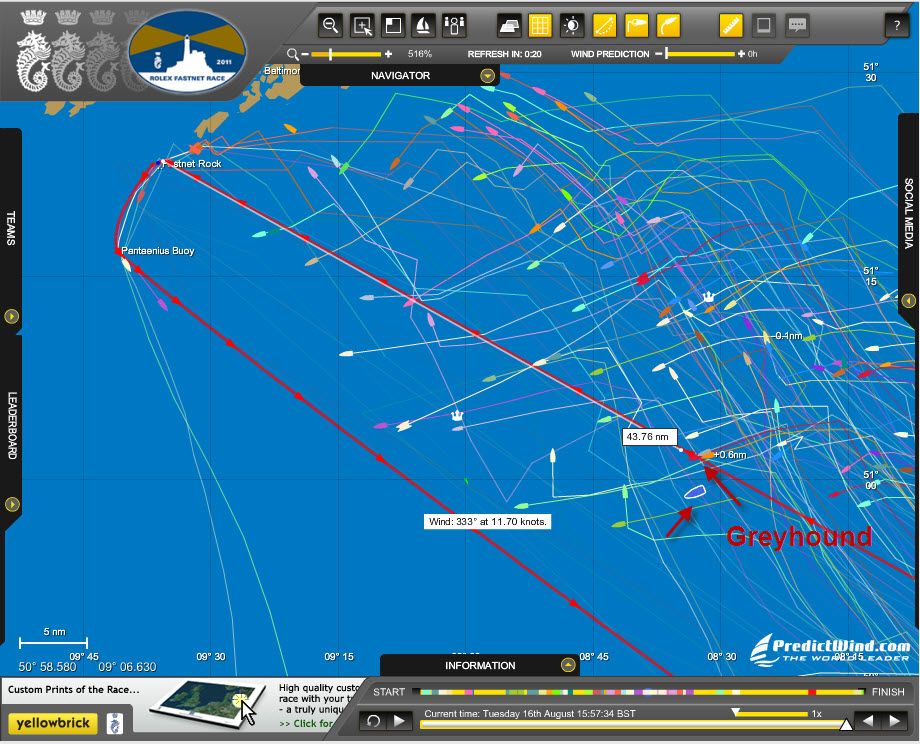 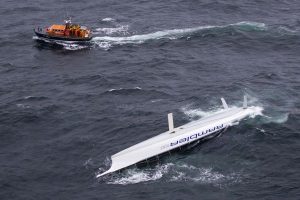 The incident happened just after Rambler 100 rounded the Fastnet Rock at 17:25 BST. At the time, Rambler 100 were leading the monohull fleet and vying for monohull line honours in the Rolex Fastnet Race which started on Sunday 14th.

Mick Harvey’s account of the incident was charged with emotion. The tough Australian, who now lives in Newport, Rhode Island (USA), is a seasoned veteran, but he was understandably shaken by the incident:

“Soon after rounding the Fastnet Rock, the wind went southwest, right on the nose. We were beating into big seas, launching Rambler off the top of full size waves. I was down below with navigator, Peter Isler when we heard the sickening sound of the keel breaking off. It was instantaneous; there was no time to react. The boat turned turtle, just like a dinghy capsizing. Peter Isler issued a Mayday and we got out of there as quickly as we could.”

The EPIRB had been activated and a number of crew climbed over the guardrails and onto the hull as the boat capsized and helped those swimming to safety. The Atlantic swell made it difficult for the crew to get out of the water however, working together, 16 of the crew managed to scale the upturned hull.

Five of the crew were swept away by the waves out of reach of the stricken Maxi and these included Skipper, George David and partner Wendy Touton who were in the water for two and a half hours. This group linked arms, forming a circle. Valencia Coastguard diverted a local fishing boat, Wave Chieftain to assist, which winched the crew on board. Earlier a helicopter had been scrambled from Shannon Airport helicopter, Wendy Touton was airlifted for medical attention due to the effects of hypothermia and the four remaining crew were taken to Baltimore Harbour where they were re-united with the 16 crew rescued by the Baltimore Lifeboat.

“It was a scary moment. One that I will never forget,” admitted Mick Harvey. “I can’t begin to tell you how relieved I am that all of the crew are safe. The town of Baltimore has given us a wonderful welcome. I can not thank our rescuers and the people of this lovely village enough. Wendy is in Kerry Hospital and doing fine, I am just so relieved that everybody is okay.”